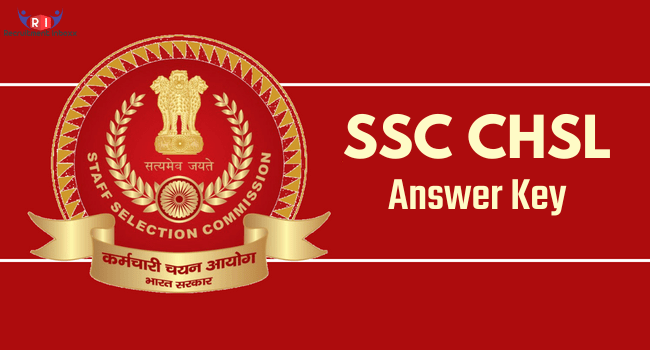 The Staff Selection Commission (SSC) has released the SSC CHSL Answer Key along with the Candidates’ Response Sheets for the Tier-1 examination on 22nd June 2022. Aspirants who were curious to check the SSC CHSL Response Sheet & Answer Sheet can now access the same from this page. The direct link to Download SSC CHSL Tier 1 Answer Key 2022 PDF is provided below.

Lakhs of govt. job enthusiasts participated in the Tier-1 exam of Combined Higher Secondary (10+2) Level Examination, 2022 organized from 24th May to 10th June 2022. Now, the tentative SSC CHSL Answer Key 2022 along with the candidates’ Response Sheets has been published by the Commission. Objections against the SSC CHSL Tier 1 Answer Sheet will be entertained till 27th June 2022 (8 pm) with the objection fee of Rs. 100/-.

For your convenience, we have shared the SSC CHSL Response Sheet link along with the step-wise procedure to download the SSC CHSL Answer Keys 2022 from the official portal. Candidates clearing the SSC CHSL Tier 1 Exam will advance to the next stage of the recruitment process i.e. SSC CHSL Tier-II Exam 2022.

Candidates are also advised to take a printout of their respective Response Sheets, as the same will not be available after the specified time limit. To acquire more details regarding SSC CHSL Answer Key 2022, you need to explore the following section of this page well-structured by the team of www.recruitmentinboxx.com.

Candidates can download the SSC CHSL 2022 Response Key by following the instructions mentioned below:

The aforementioned Answer Key released by the Commission is a tentative one. If candidates have any sort of objections regarding the provisional Answer Key, then they can raise their objections against the same from 22nd June 2022 (8 pm) to 27th June 2022 (8 pm) on payment of Rs.100/- per question/ answer challenged. Objections received after 08.00 PM on 27th June 2022 will not be entertained under any circumstances.

How to File Objection against SSC CHSL Exam Solutions 2022:

Staff Selection Commission will declare the CHSL Tier I Exam Results before the release of the final answer key. Aspirants clearing the Tier-1 exam will be further invited to appear for the SSC CHSL Tier 2 Exam 2022, the schedule for which will be intimated by the commission in due course of time.

Candidates have to secure more than the specified SSC CHSL 2022 Cut Off to clear the Tier-1 exam. The Cut Off depends on various factors such as total vacancies, the difficulty level of exam, number of aspirants who participated in the exam, and number of exam shifts. SSC CHSL Tier-1 Cut-Off Marks will be released along with the result. Refer to the table placed below to check the expected SSC CHSL 2022 cut-off:

Refer to the table placed below to check the important dates in relation to the SSC CHSL Tier-1 Answer Key 2022:

Candidates, who have qualified in SSC CHSL Tier-1, will be eligible to appear in SSC CHSL Tier-2. After clearing the tier-2 exam, candidates will be called for the final stage of the SSC CHSL selection process  – a personal interview or document verification.

The SSC CHSL Tier I Answer Key has been uploaded on the official website of the Staff Selection Commission www.ssc.nic.in. So, the candidates who had participated in the exam can check their SSC CHSL Response Sheet 2022 through this page.

Something You Must Know:

Get Here All Latest: SSC Notification

For more details about SSC CHSL Answer Key 2022 directly in your mailbox, you can subscribe to our free email service. You may also join us on Facebook and Google plus to get updated information about SSC 10+2 Answer Key Expected Date.

You can also bookmark the web portal that is www.recruitmentinboxx.com by pressing the Ctrl+D option to know the information regarding the Staff Selection Commission CHSL Answer Key. Thank you….