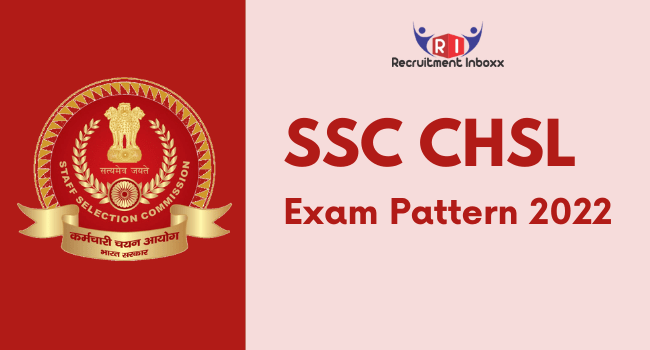 Ques1. Is SSC CHSL Exam Pattern the same as that of the SSC CGL?
Ans. No, the patterns for both SSC CGL & SSC CHSL exams are different.

Ques5. What is the weightage of the SSC CHSL tier 3 exam?
Ans. SSC CHSL tier-III exam does not hold any weightage. It is qualifying in nature.

Ques7. What is SSC CHSL salary?
Ans. According to the revised 7th CPC, the starting salary for an SSC CHSL officer is Rs. 19,900 per month.

Check out the latest Tier-wise SSC CHSL Exam Pattern from this page. We have provided the detailed SSC CHSL 2022 Exam Pattern for Tier 1, 2 & 3. Know about the SSC CHSL Marking Scheme, Section-wise Marks Distribution, No. of Questions, Exam Duration, etc.

After applying online, you must be aware of SSC CHSL 2022 Exam Scheme to know key details about the examination. It will certainly help in effective and efficient exam preparation.

To know more details about SSC CHSL Exam Pattern 2022, you may scroll down and explore the following section of this page designed by the team of www.recruitmentinboxx.com.

The SSC CHSL (10+2) Exam is conducted in three stages – Tier-I, Tier-II, and Tier-III. It is necessary to clear all three stages in order to be eligible for the final appointment to various posts under SSC CHSL 2022.

The following table will help you understand the structure of the SSC CHSL Exam:

The detailed SSC CHSL Tier 1 Exam Scheme 2022 has been explained below:

SSC CHSL Tier-II is a descriptive type test. The objective of this test is to examine the writing skills of candidates in English/Hindi. The detailed Scheme for SSC CHSL Tier 2 is explained below:

Only those candidates will be eligible to appear in Tier 3, who have cleared Tier-1 and 2. Tier-III of SSC CHSL is a Skill Test / Typing Test which would be of qualifying in nature.

As per the updated SSC CHSL Syllabus 2022, questions will be from General Intelligence, Quantitative Aptitude, English, and General Awareness.

If you know the Staff Selection Commission CHSL Exam Pattern, then you will be able to prepare for the exam according to it. You can divide the time for each subject as per the requirement. So we suggest you check SSC Combined Higher Secondary Level (10+2) Exam Pattern from this page and prepare for exams according to SSC CHSL Examination Pattern.

Candidates are required to go through the Official Link of the Staff Selection Commission to know more about SSC CHSL Exam Pattern 2022. You may stay in touch with our web portal www.recruitmentinboxx.com to get the latest updates as we update our pages from time to time.